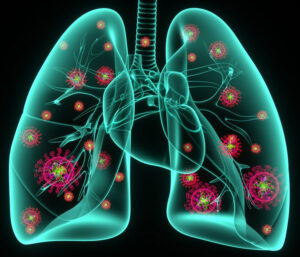 These observations from a doctor in South Africa are being shared since they might be of help to someone. Do your own research and figure out what available protocols work best for you. There are other approaches that have been shown to work. Seek advice from competent doctors who have successfully helped many CV19 patients.

CV19 pneumonia is actually mast cell degranulation of the lungs! Put simply, it's an allergic reaction occurring after the viral phase ends, most likely to something in the viral particles left over after the body deals with the virus. The reason you can't tell it's an allergic reaction is because it's happening in the lungs, so you experience only symptoms of chest tightness and fatigue!

Dr. Shankara Chetty of South Africa has closely monitored and treated over 8000 patients personally. He noticed there was something very different about viral pneumonia in comparison to CV19 pneumonia and was determined to figure out what the mechanism of treatment should be. He had all of his patients come in as soon as they expressed any symptoms. He followed the progression of everyone's disease pattern and noticed something very interesting which resulted in his findings.

Every person progressed the same for the first 5 days. All of them, even those who eventually went on to worsen, appeared to improve around the 5th to 6th day. But from that day forward, there were two distinct camps. One group would always go on to improve after that initial period. But the other group would suddenly worsen on day 8. Not day 7 or 9, always day 8, and they would be fine on day 7, while going on to develop what we've come to recognize as CV19 pneumonia. But it's not pneumonia at all!

Dr. Chetty knew the pattern of expression for pneumonia of all kinds and this CV19 "pneumonia" wasn't behaving like any other form of pneumonia. In fact, the flow of oxygen wasn't restricted at all, like in pneumonia. Patients were showing a restriction to lung expansion, but not air flow and it was coming on rapidly, unlike pneumonia. The lung itself was inflamed and couldn't expand.

It was then that he recognized the similarity this condition had with an allergic reaction. The second an allergic reaction happens, inflammation creates instant symptoms. In peanut allergies for example, you eat a peanut and your face swells up. Pneumonia is progressive, not instant like this.

As it turns out, this illness is biphasic, meaning there could potentially be two phases of illness and it's the second phase where mortality and morbidity occur.

He had a critically ill patient, who had diabetes, hypertension and her oxygen saturation was in the 80's. Both pre-existing conditions are co-morbidities of CV19. He treated her with a high dose steroid and added in an antihistamine.

When he called to check on her the next day, her oxygen levels were normal and she progressed on to full health.

It's important to note here too that none of his patients have experienced complications of CV19 or long haulers. He has since begun working with long hauler's cases though and even in their testing, he is discovering that it's related to mast cell degranulation - aka - histamine! He may be the ONLY doctor tracking this illness so closely. It is important to notice that the I-MASK protocols have been altered to include Singulair.

Consider adding antihistamines to your C protocol! Remember there are different types of antihistamines. Some are H1 blockers and some are H2. If one doesn’t work well for you, you many need to try a different one before deciding it doesn’t help. Popular Antihistamines include Benadryl, Zyrtec, Claritin, Pepcid.