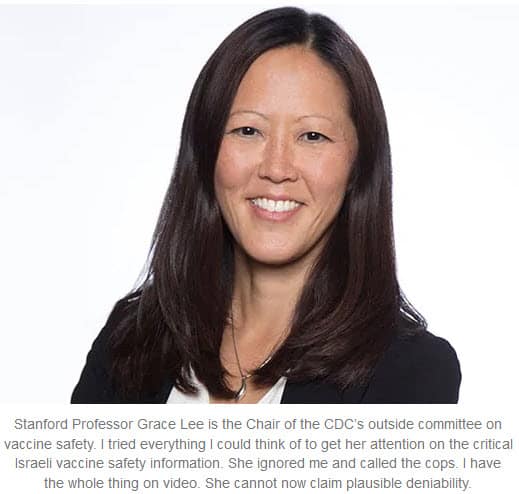 (Notice how even those doctors who should be looking at the adverse vaccine data really don't want to be bothered, even though large numbers of people are dying and/or having serious medical issues. Be careful with what you believe.)

I finally got a response to my question to ACIP Chair Grace Lee about whether she wants to see the COVID vaccine safety data from Israel. She called the cops on me. I have the whole thing on video.

I was able to establish, beyond any reasonable doubt, that the chair of the ACIP committee, who is arguably the most important person in the world who should want to see the Israeli safety data that was hidden since March of 2022 by the Israeli government, does not want to see the data.

She should be fired. You simply cannot have a chair of a critical safety committee relied upon by the entire world who is not interested in seeing critical safety data that shows the vaccines are not safe.

Yet nobody is speaking out about this. Did the rules of science change? Is it now OK to ignore any data that goes against your belief system?

When you read this article, keep in mind the following:

Ever since writing my article on the Israeli safety data on Sept 2, 2022, I have been trying to ask the head of the ACIP committee, Stanford Professor Grace Lee, if she wanted to see the data.

Surely, she would want to see this data. How could she not want to see the data? She is arguably the top vae safety person in the world outside of the CDC.

Unlike Dr. Kulldorff, it’s Dr. Lee’s job to be aware of the safety data for the vaccine. It’s her most important responsibility. If there is a single person in the world who would be most interested in seeing the vaccine safety data, it should be Dr. Lee.

Just to double-check my logic, I asked Martin why would anyone in an official position of responsibility on vaccine safety NOT want to see the Israeli data? He said, “I don’t know.”

So the default assumption is that Dr. Lee would want to see the data as well, just like Dr. Kulldorff.

Oddly, Dr. Lee didn’t respond to my respectful emails asking if she wanted to see the data. If she had responded either yes or no, that would have been the end of it. But I heard nothing.

I don’t give up so easily. So I texted her cell phone.

And that didn’t work either! Again, no response. She could have simply responded “no” and that would have been the end of it. Baffling!

Perhaps her text messages weren’t working? This happened to my AT&T phone recently where text messages didn’t work until AT&T reset my messaging.

I knew how important this data was to the world and surely she would want to see it but clearly my messages must simply be buried in all the emails and text messages she gets or something else was getting in the way. My question deserves an answer because lives are at stake!

It would not be right for me to give up at this point without trying every option at my disposal to get her attention on this matter.

Since she conveniently lives just 10 minutes from my house, I went to her front door and rang the doorbell. I waited and waited for her to answer the door, but nobody came to the door. So I left.

I’ve tried this multiple times. I guess I keep missing her. Darn.

Today I tried again. This time I waited because there was a light on inside the house. I waited about 20 minutes for her to answer the door. After all, she could be on zoom call, taking a shower, or doing something important like feeding the dog.

I just wanted an answer… “why don’t you want to see the data?” That’s it.

After around 20 minutes of waiting at her door, I gave up, went back to my car, and wrote a nice note asking if she wanted to see the data, and attached it to the hook on her front door.

Do you want to see the Israeli safety data? Please let me know yes or no. Lives are at stake. Steve Kirsch 650-xxx-xxxx.

Here’s the image of the note (the hole was where it was attached to the door hook): 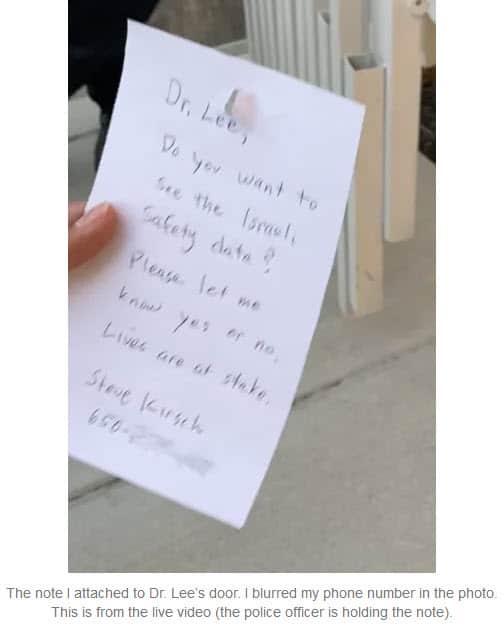 As I was leaving, I was greeted by two Palo Alto police officers.

So I started my video camera to record the only proof of delivery I was ever going to get.

Clearly, she was at home and didn’t want to answer the door and have a friendly conversation about the scientific data that could save hundreds of thousands of lives.

She has a Ring doorbell. She could have said “Hello, who is there?”

But no. She chose to remain completely silent and call the police.

I guess that’s the way science works today: you are never supposed to actually speak with anyone with opposing views, even if they have lifesaving information not available elsewhere.

I handed the note I had put on her door to the officer and I saw him share it with her as I walked to my car. So the message was delivered for sure… by the Palo Alto Police!

So if she didn’t know already, she knows now why I was there and there is now a public record of the delivery to the officer.

And there was no call on my cell phone after that. This means that she was notified and declined to see the data, jeopardizing lives.

The bottom line is this: I went the extra mile to eliminate any possible plausible deniability excuse. Even if I had Fedex'ed the offer to see the data, she could say she never saw my FedEx. Now she cannot claim she never saw it.

Here’s the video of the incident: 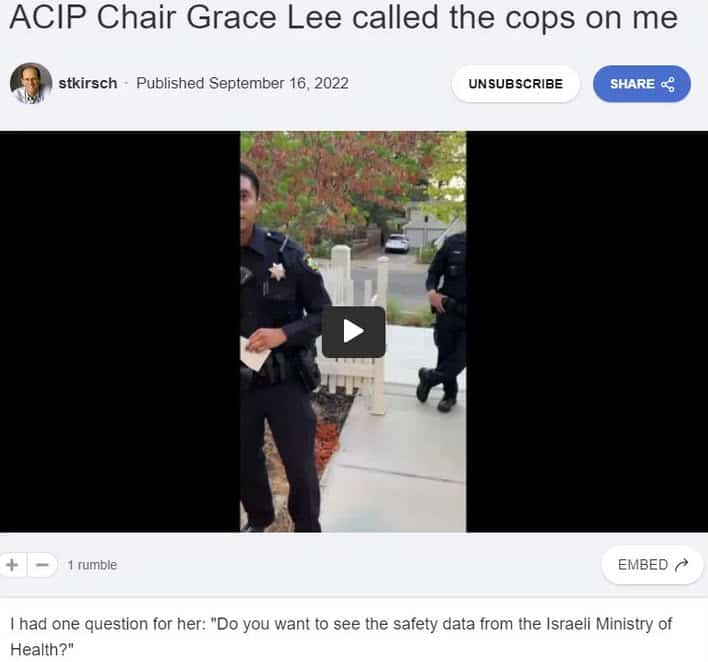 Thanks to the Palo Alto Police for handling this incident properly.

The officers handled it well. I have no complaints.

Why do doctors close their eyes to medical injuries?

Many people in the medical field will intentionally close their eyes to the possibility a medical injury occurred or data showing that a drug they endorsed is toxic. Here’s why: 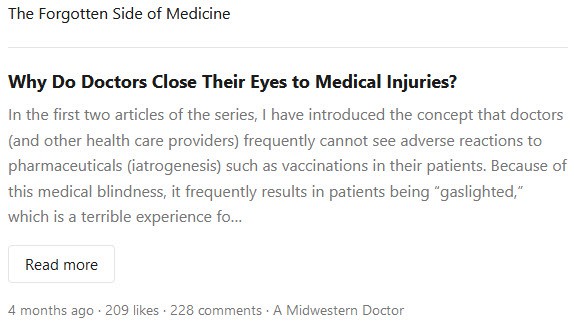 I was proud that I did everything I possibly could do to draw Dr. Lee’s urgent attention to this very important safety issue. I wonder if she is equally proud of ducking my question, refusing to answer her door, and calling the cops on me for trying to bring this issue to her attention?

Finally, it’s not just me they are ignoring. The BBC is taking the credit for having a group of over 300,000 vaccine injured removed from Facebook:

Once the BBC alerted Facebook's parent company, Meta, the groups were removed.

So the world’s top vaccine outside regulator doesn’t want to see the safety data from the Israeli Ministry of Health, and the BBC is engaging in deplatforming the vaccine injured so they don’t have a voice either.

Nobody in charge wants to know about what the data really shows, and the mainstream press wants to make sure you only hear their side of the narrative.

We should all be very concerned about both of these developments and demand answers.